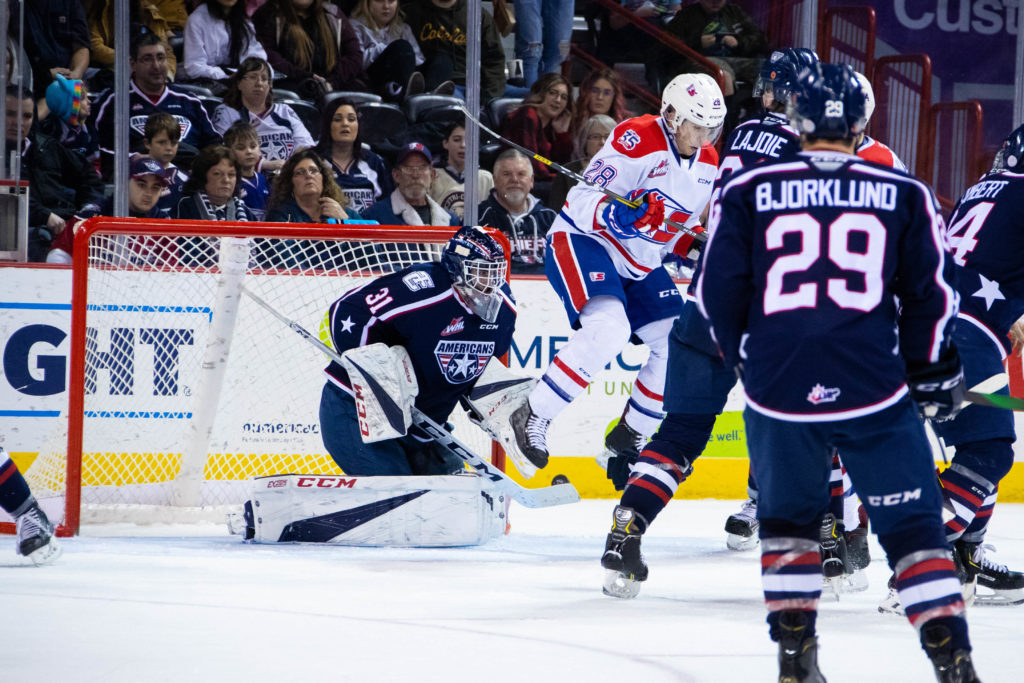 The Americans and Chiefs matched up today in Spokane for the fourth of 12 games between the two teams this season. Tri-City fell behind by three goals early and was unable to make a full comeback, falling to Spokane 5-3.

Spokane’s Adam Beckman highlighted the game with a hat trick. The 18-year-old forward opened scoring at 4:32 first period and followed with Spokane’s second goal of the night at 11:47. Beckman, a prospect of the Minnesota Wild, leads the league with 57 points.

After letting in three goals on 10 shots, Beck Warm was relieved in net by Talyn Boyko

Nick Bowman brought the Americans into the game with a power play goal at 4:37 second period, assisted by Blake Stevenson, The goal marks Bowman’s second in two nights, after scoring a shorthanded goal last night against Portland, also assisted by Stevenson.

Parker Bell gave the Americans a strong start to the final frame with his first ever WHL goal. The rookie forward scored off pass in front of the net from San Jose Barracuda prospect Krystof Hrabik.

Luke Zazula took a kneeing penalty with three minutes remaining to put the Americans on the penalty kill. Still trailing by two, Coach Buchberger pulled Talyn Boyko for an extra attacker. Spokane’s Beckman scored his third of the night to complete his hat trick on the empty net.

Samuel Huo scored a third goal for Tri-City with 11 seconds remaining to finish the game with score of 5-3 in favor of Spokane.

Up next at the Toyota Center is the annual New Year’s Eve game against the Spokane Chiefs. Join us for the last home game of the decade. You can purchase tickets online from Ticktmaster here.