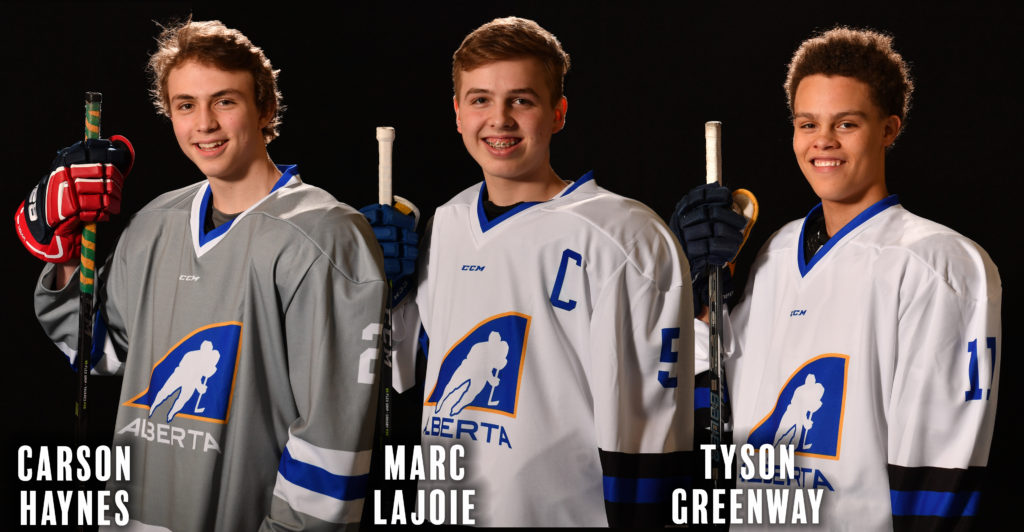 KENNEWICK, WA – Tyson Greenway, Carson Haynes, and Marc Lajoie were named to the Team Alberta U16 Male Shortlist on Monday. Thirty-five players from Alberta, including the three Americans prospects, have taken the next step to compete at the 2019 Canada Winter Games in Red Deer.

Players were selected to the shortlist based on their overall play throughout the Team Alberta scouting process, past Team Alberta programs, and at the U16 Summer Camp in Camrose, July 3-8. Eighty players were invited to Camrose, and worked through high intensity on-ice sessions, as well as off-ice training and classroom sessions.

Lajoie, the Americans first-round selection (14th overall) in the 2018 Bantam Draft, felt like he had a strong camp and described the games in Camrose as “very physical and competitive.” The forward, listed at 6’2” and 205 pounds, played this past season for Northern Alberta Xtreme Bantam Prep and notched 30 points (12G, 18A) in 20 games.

“I’m very happy to have made the shortlist,” said Lajoie. “I am one step closer to making Team Alberta, but there is still lots of hard work ahead.”

Haynes said he also felt he played well at the camp. The 6’1, 160-pound defenseman was selected in the third round (58th overall) by the Americans at the 2018 Bantam Draft. This past season he captained the Lethbridge Bantam AAA Golden Hawks and tallied 24 points (8G, 16A) in 36 games.

“Making the shortlist gave me a boost of confidence in my life, not just hockey,” said Haynes.

“It is an honour to see my name on the shortlist with so many other talented players and getting a change to represent Alberta,” said Greenway. “This is a huge accomplishment for me and I will continue to work hard to earn a place on the final roster.”

“This year’s Summer Camp in Camrose showcased just how many talented athletes we have in Alberta,” said Mike Kraichy, Manager of Team Alberta. “Now, as we move towards the Canada Winter Games, these 35 players are now one step closer to representing their home province in Red Deer.”

The shortlisted players will be scouted with their club teams in the fall, prior to final decisions on the 20 players selected to the Team Alberta roster. The 2019 Canada Winter Games run February 15 – March 3 in Red Deer.