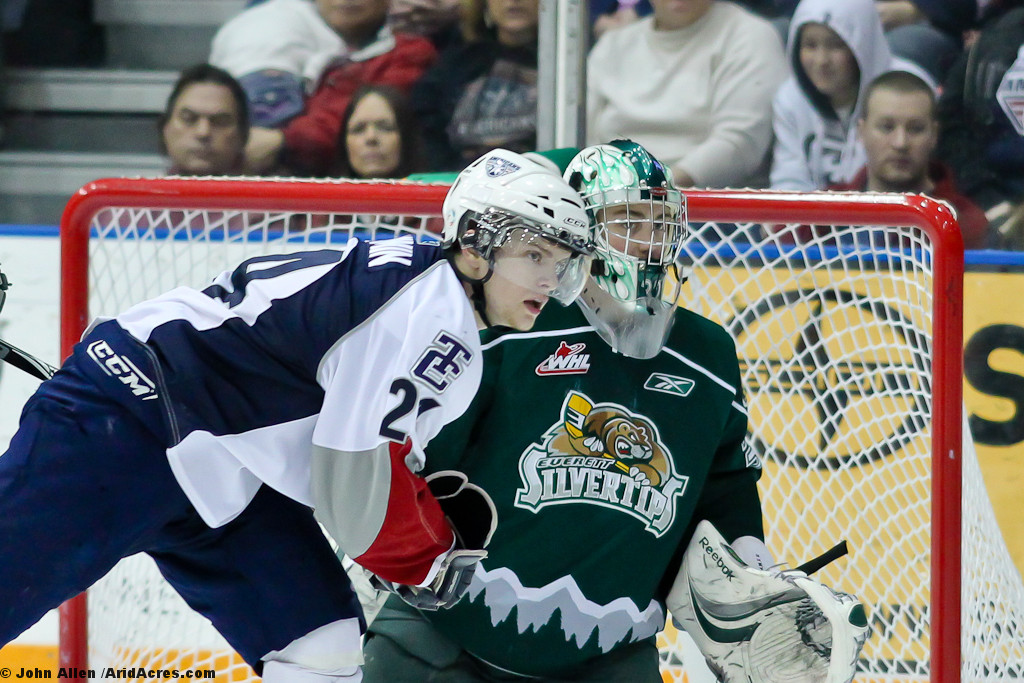 KENNEWICK, WA – The ‘Comeback Kids’ were at it again Friday.  And this time, they finished the job.

Matt MacKenzie, Kruise Reddick and Carter Ashton each notched a goal and an assist, with Ashton winning the game 2:52 into overtime, as the Tri-City Americans (38-21-2-2, 80 pts) rallied to defeat the visiting Everett Silvertips (27-27-6-4, 64 pts) 3-2 in front of 5,205 fans at the Toyota Center.  With the win, the Americans snapped their three-game losing skid.  Meanwhile, Everett dropped their third straight but still holds a 5-4 lead in the 10-game regular season series with Tri-City.

After nearly staging a five-goal rally in their last game, Tri-City would need to come from behind again, as Everett took the early 1-0 lead.  Just 1:52 into the contest, and after sustained Everett pressure inside the Americans’ zone, Josh Birkholz let a shot from the point go that eluded Tri-City starter, Drew Owsley, for his 17th goal of the season.

But, only over four minutes later, and just seven seconds into their first power play, MacKenzie sent a drive from the right point, past Kent Simpson, tying the game at 1.  The two teams wound up combining for 27 shots in the period, but the contest remained knotted at 1 going into the first break.

Then, despite another 27 combined shots in the second period, it took a great pass, followed by an even better shot for Everett to re-take the lead.  Only 5:34 into the second, Ryan Murray broke out Clayton Cumiskey.  Cumiskey, who made two key moves to get past the Tri-City defense, waited until the last second to send a pass, across the slot, and onto the stick of Scott MacDonald.  Then, from the far circle, near the goal line, MacDonald fired a shot over Owsley for his ninth goal of the season and a 2-1 Everett lead.

But, with just eight seconds remaining in the second period, Everett had to remove Simpson from the game, who skated gingerly off the ice.  Back-up Luke Siemens took the reins for the final eight seconds, as the ‘Tips took their one-goal lead into the locker room.

However, with 5:45 left in regulation, and after several near-misses, Tri-City finally tied the game.  Reddick took a nice feed from Brendan Shinnimin, and then shelved a shot on Siemens, electrifying the hometown faithful.  Tri-City then generated two more good scoring opportunities in the final minutes, but could not cash in, as the contest eventually headed to overtime.

Owsley, who made his first start after missing 11 games due to injury, stopped 30 of the 32 shots he faced, earning his 31st win of the season.  On the other end of the ice, Simpson collected 27 saves on 28 shots through 39:52 of work before leaving the game.  Siemens, meanwhile, picked up 11 saves on 13 shots and was tagged with the overtime loss.  Tri-City finished the night 2-for-4 on the power play and was a perfect 2-of-2 on the penalty kill.

With two weeks left in the regular season, the Americans will now head off on their last major road trip of the season.  Tri-City will play four games in six nights, starting with a re-match with the B.C. Division’s Vancouver Giants (33-25-1-4) on Sunday, March 6.  Game time is 5:00 p.m. at Pacific Coliseum.  The Americans, which were humbled 5-0 in last Sunday’s trip to Vancouver, will look to win their fourth season series in five years vs. Vancouver.  Meanwhile, the Giants, who host Portland on Saturday, are looking to catch Tri-City for that #4 seed in the standings, ensuring them home ice in the first round of the playoffs.  Currently nine points separate the two conference rivals with just nine games remaining.  Fans can catch all the action live, via WHL Live, at the Americans’ home away from home, Kimo’s Sports Café in Richland.  The game will also be broadcast live on NewsTalk 870 AM, starting with the Sterling Savings Bank Warm-up Show at 4:45 p.m.