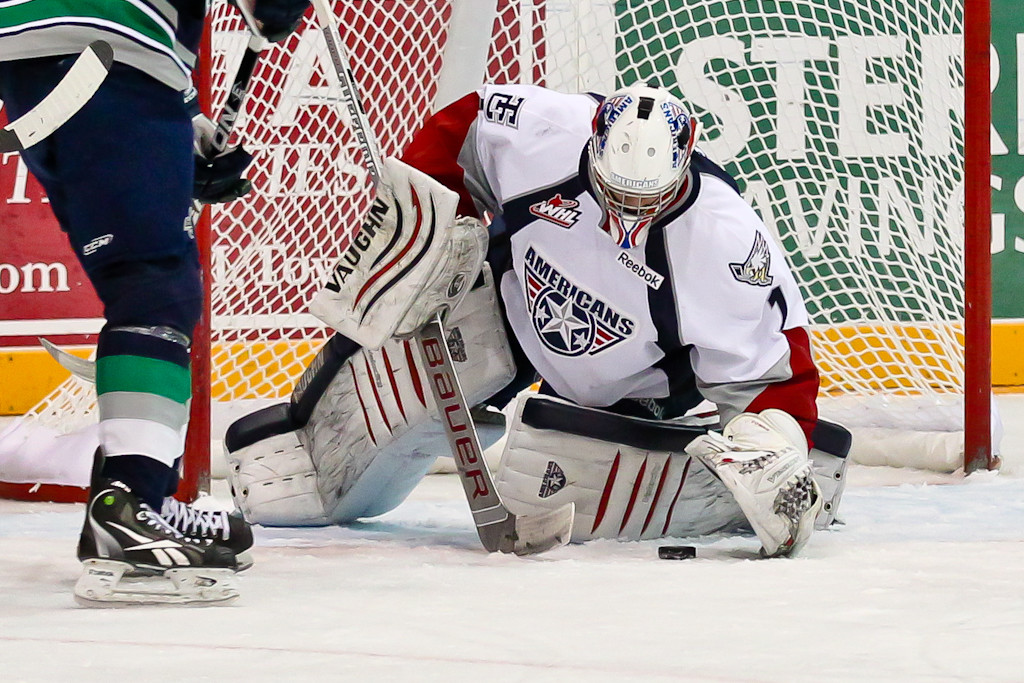 KENNEWICK, WA – Maybe Dorothy was right, there is just no place like home.

Four different skaters notched 2-point nights and rookie Eric Comrie corralled all 16 shots he faced, as the Tri-City Americans (34-10-0-0, 68 pts) blanked the visiting Seattle Thunderbirds (17-24-0-1, 35 pts) 4-0 in front of 3,590 fans at the Toyota Center.  With the win, Tri-City improved their home winning streak to 13 games, while snapping their two-game losing skid.  Meanwhile, Seattle has now lost 7 of their last 8 games and extended their losing streak inside the Toyota Center to 20 games.

Playing their fifth game in seven nights, but first in front of the hometown faithful, Tri-City took control of Tuesday’s contest by scoring twice in the first period.

Only seconds past the midway point of the period, newly acquired forward Jesse Mychan put back a rebound of an Adam Hughesman shot, giving him 6 on the year, 3 of which have come in his first 5 games in a Tri-City sweater.  Then, just 1:18 later, Mason Wilgosh quickly made it a 2-0 game.

Coming at 6:16 of the second period, and on their first power play of the game, Patrick Holland extended his career-best point streak to 12 games after he was credited with his 19th goal of the season.  The play was reviewed earlier, but was awarded to Holland after it was determined that the puck crossed the goal line before the Seattle net became dislodged.  Tri-City went on to outchance the T’birds 15 to 5 in the period, yet the play of Calvin Pickard kept Seattle within striking distance.

Finally, inside the final three minutes of regulation, and on another power play, Justin Feser took a great backdoor pass from Jordan Messier to bury his 22nd goal of the season and ice the game.

Pickard, who finished with 36 saves on 40 shots, lost for the 5th time this month and fell to 0-12-2-0 all-time at the Toyota Center.  Meanwhile, Comrie notched his 3rd shutout of the season, improving to 15-3 on the year and 8-1 at home.  Tri-City finished the night a perfect 2-of-2 on the power play while holding Seattle scoreless on their two man-advantage opportunities.

With a win back under the belts, the Americans can now rest up at home and prepare for a pivotal doubleheader weekend at the Toyota Center.  Before a first-place conference showdown with the Kamloops Blazers on Saturday, Tri-City must first face-off against the arch rival Spokane Chiefs (22-14-3-3) on Friday, January 20.  Game time is 7: 05 p.m.  This will be Game 7 of the 12-game season series, with the home team having won 5 of the first 6 contests.  Tickets are available through all Ticketmaster outlets, including online at ticketmaster.com, the Toyota Center box office, or all Fred Meyer outlets.  The game will be aired live on ROOT Sports, starting at 7:00 p.m.  The game will also be broadcast live on NewsTalk 870 AM, starting with the Sterling Savings Bank Warm-up Show at 6:45 p.m.

Notes:
With 2 points tonight, Adam Hughesman is now 4th all-time in franchise scoring, passing Terry Degner (304)…With 2 points tonight, Brendan Shinnimin moved past Bill Lindsay (271) into 9th all-time in franchise scoring…With 20 consecutive wins at Toyota Center, the Americans’ home win streak vs. Seattle is the franchise’s longest against any WHL opponent.  The previous franchise high was 18 straight against the old Victoria Cougars, which went from February 25, 1989 thru March 11, 1992…Now with 8 shutouts on the year, Ty Rimmer and Eric Comrie are one shy of matching the franchise-high (9) for shutouts in a season, set in 2009-10.