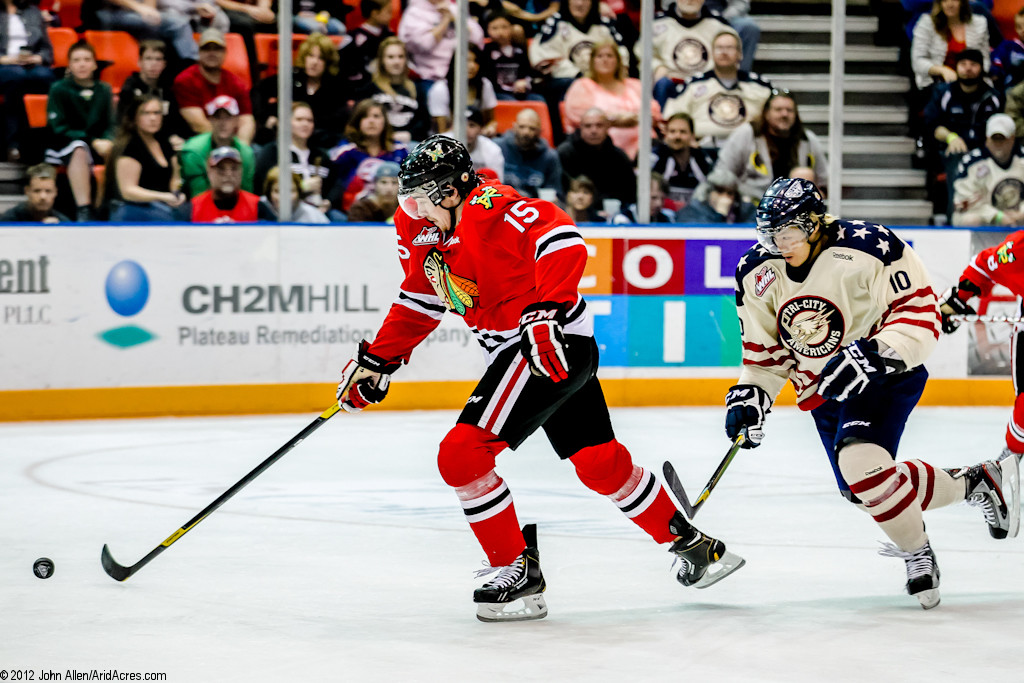 KENNEWICK, WA – They recorded only one shot in overtime, but it was all they needed.

Marcel Noebels blasted a rink-wide pass from Sven Bartschi, past a diving Ty Rimmer, lifting the Portland Winterhawks (9-3-0, 18 pts) to a 5-4 overtime win over the Tri-City Americans (8-0-4, 16 pts) in Game 1 of the Western Conference Finals in front of 3,753 fans at the Toyota Center. With the win, the ‘Hawks take a 1-0 lead in the best-of-seven series, which continues tomorrow in Kennewick with Game 2.

Despite each team coming off a taxing Game 7 win on Wednesday, Portland and Tri-City combined for 26 shots on goal in the 1st period, with the Americans holding a 16 to 10 edge.  However, it wasn’t until the final minute that either team found the back of the net.  With 19.9 seconds left in the period, Sven Bartschi picked off Mitch Topping inside the Portland zone and took off on a breakaway.  Rimmer came away with a great pad save, but moments later, the rebound bounced into the slot, where Brendan Leipsic capitalized for his 4th playoff goal.

Just over six minutes into the 2nd period, though, Tri-City answered back on the power play.  Less than a minute into the man-advantage, Brendan Shinnimin ripped a shot from the high slot that glanced off both posts before crossing the goal line, tying the game at 1.

But, two minutes later, Bartschi was heard from again.  Taking a feed from Oliver Gabriel, Bartschi placed a perfect shot over Rimmer as Portland regained the lead.  Then, with 4:22 left in the period, Cam Reid made it a two-goal lead after he buried Brad Ross’ pass from out of the corner.

However, inside the final two minutes of the second, a Ross penalty put the Americans back on the power play, which led to Patrick Holland’s goal from the high slot, making it a 3-2 game after 40 minutes.

Trailing after 2 periods for the first time this post-season, the Americans used yet another man-advantage marker to tie the game at 3.  Nine minutes into the 3rd period, and from almost the exact same spot, Holland rifled one past Mac Carruth, giving Holland his 5th goal of the post-season.

Nearly two minutes later, though, Portland bounced back with a power play goal of their own, re-taking the lead for a third time.  With Ross screening Rimmer, he never saw Joseph Morrow’s shot from the point, as it glanced off the Tri-City netminder’s pads and across the line.

But, Tri-City had one more rally in them, knotting the game at 4 with 4:51 left in regulation.  Off a one-timer from the high slot, Mitch Topping’s blast eluded Carruth, giving him his third goal of the playoffs.

Tri-City then needed their penalty killing units to preserve the final two minutes before forcing overtime.  Once into the extra session, Tri-City generated several scoring chances off their 7 shots, but none were bigger than Connor Rankin’s denial at the 2:07 mark.  Parked at the top of the crease, a loose puck found Rankin’s stick, only to then watch his attempt blocked by Reid’s stick at the last second.

The drama began to mount, as five and a half minutes into overtime, Carruth played the puck outside the trapezoid, putting the ‘Hawks back on the penalty kill.  However, just 16 seconds after dodging Tri-City’s power play bullet, Bartschi fed a cross-ice feed to Noebels, who one-timed a shot from the left circle to end the game.

Carruth faced a playoff-high 47 shots, stopping 43 to improve to 9-3 this post-season.  Meanwhile, Rimmer finished with 26 saves in the loss.  Tri-City went 3-for-5 on the power play, while Portland was 1-of-4 on the man-advantage.

Both teams will now prepare to get as much rest as possible before hitting the Toyota Center ice for Game 2 tomorrow, Saturday, April 21.  Game time is 7:05 p.m.  The Americans, which have not lost back-to-back games this post-season, will look to pull even in the series before it shifts to Portland for Games 3 and 4.  Tickets are available through all Ticketmaster outlets, including online at ticketmaster.com, the Toyota Center box office, or all Fred Meyer outlets. The game will also be broadcast live on NewsTalk 870 AM, starting with the Sterling Bank Warm-up Show at 6:45 p.m.