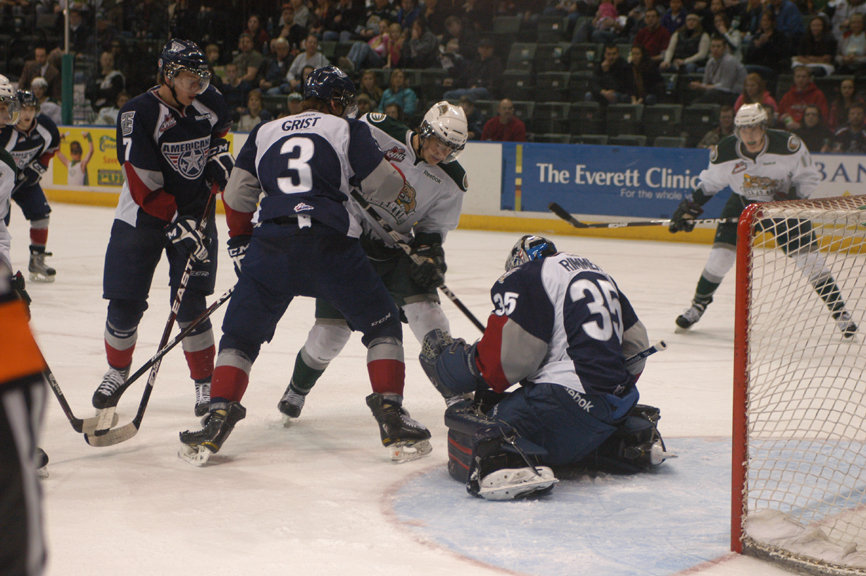 EVERETT, WA – After coming up just short of recording his 300th career point last night on home ice, Adam Hughesman joked about the possibility of being stuck on 299 for a while.  Turns out he had to wait less than 24 hours.

Hughesman became just the fifth player ever to record 300 points with Tri-City, while Ty Rimmer stopped all 22 shots he faced as the visiting Tri-City Americans (32-7-0-0, 64 pts) blanked the Everett Silvertips (7-24-1-7, 22 pts) 4-0 in front of 5,908 fans at Comcast Arena.  With the win, Tri-City stretched their franchise-best winning streak to 13 games while equaling their longest road winning streak of the season (6).  Meanwhile, Everett dropped their second straight game and fell to 1-3 vs. the Americans this season.

Prior to tonight, this season’s Tri-City/Everett series has featured a blowout victory for each team and a shootout win for Tri-City, so predicting Saturday’s outcome was no easy task.  But, the Americans’ top-ranked penalty killing units staved off three Everett power play chances in the first period, giving their offense a chance to crack Silvertips goaltender, Kent Simpson.

Finally, with 3:28 left in the first period, Everett’s Josh Caron struggled to control a pass at the point, which allowed Malte Strömwall to work the puck free and take off all alone on Simpson.  Strömwall eventually beat the ‘Tips’ starter, notching his 9th goal of the season and putting Tri-City on top 1-0.

The contest appeared headed for another tight finish until the Americans exploded for three goals in a 4:29 span inside the final six minutes of the second period.  While on the power play, Brendan Shinnimin used a Michal Plutnar rebound to shelf a shot over Simpson’s glove, making it 2-0.  Then, 3:22 later, Hughesman put back his own rebound and, in the process, joined the 300-point club.  Finally, a minute later, Justin Feser fed Mason Wilgosh out of the right corner, who then knocked back his 8th goal of the season from inside the slot.

And, when the dust finally settled on the second period, the Americans now led 4-0 and had chased Simpson from the contest.  Simpson finished with 22 saves on 26 shots in the loss.  Meanwhile, back-up Austin Lotz shut the door over the final 20 minutes, stopping all 12 shots he faced in relief.  Tri-City finished the night 1-for-4 on the power play and was a perfect 6-of-6 on the penalty kill.  The Americans are now a perfect 20-of-20 on the penalty kill vs. Everett this season.

On the other end of the ice, Rimmer wrapped up his career-best 5th shutout of the season and 9th of his WHL career.  Rimmer has now posted shutouts in back-to-back starts and in 3 of his last 6.  His shutout streak currently sits at 160 minutes and 31 seconds.  Rimmer also gave Tri-City their 7th shutout this season, which is two shy of matching the franchise’s high-water mark for shutouts (9) in a season set in 2009-10.

After a day off tomorrow, the Americans will get back to work before wrapping up their 5-game road trip against four of the Western Conference’s best.  With road games looming vs. Vancouver, Spokane and Portland, the Americans must first travel to Interior Savings Centre for a match-up with the B.C. Division’s first-place Kamloops Blazers (28-10-1-2).  Game time is 7:00 p.m. on Wednesday, January 11.  The Blazers come in having won three straight and 4 of their last 5, while looking to avenge a 3-2 overtime loss to the Americans back on Nov. 19 in Kennewick.  Fans can catch all the action live, via WHL Live, at Kimo’s, the Americans’ home away from home, starting at 7:00 p.m. The game will also be broadcast live on NewsTalk 870 AM, starting with the Sterling Savings Bank Warm-up Show at 6:45 p.m.