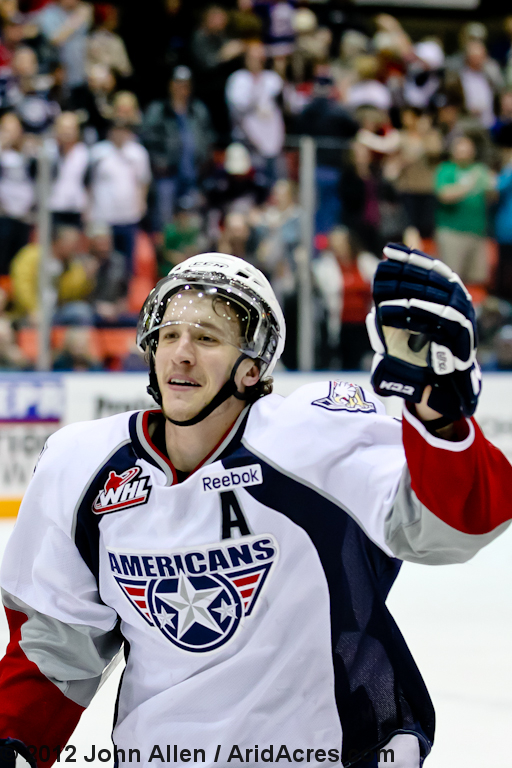 The Winnipeg, MB duo used up their WHL eligibility last season and will use the Americans’ camp as conditioning before they go their separate ways to begin their professional hockey careers.

“Both players approached me about the idea in August,” said Tory.  “It’s a tremendous example of how important the junior hockey experience was in their lives, playing for a combined 605 games for our franchise.  They helped establish a culture and legacy within our program and, for that, I am very grateful…they will always be welcome within our room.”

Hughesman finished his Tri-City career ranked inside the club’s top-3 all-time in games played (338) and goals scored (140), and 4th all-time in assists (210) and points (350).  Tri-City’s 2nd round Bantam Draft pick in 2006, Hughesman wrapped up his 5-year career with personal-best marks in goals (50), assists (66) and points (116) as part of the Americans’ 2011-12 campaign.  Hughesman also has appeared in a franchise-high 72 playoff games, guiding Tri-City to all four of its division titles over the past five seasons.

Shinnimin, meanwhile, was a non-drafted list player that earned a full-time roster spot with Tri-City prior to 2008-09.  In that time, Shinnimin posted three consecutive seasons of 80+ points, including a CHL-best 134 points in 2011-12 that earned him WHL and CHL Player of the Year titles.  Shinnimin, who also went undrafted in the NHL Draft, later signed an Entry Level Contract as a free agent with the Phoenix Coyotes last March.  Playing four full seasons with Tri-City, Shinnimin leaves the Americans ranked 5th all-time in regular season points (337) and assists (206) and 6th in goals (131).  Shinnimin also departs as the franchise’s record-holder for career playoff points (64) and assists (45).

“This speaks volumes to the character and commitment of these two guys wanting to give something back to our program,” Tory continued.  “It is important that our younger players understand what it means to wear an Americans’ jersey and no one has done it better over the last five seasons than Adam and Brendan.”