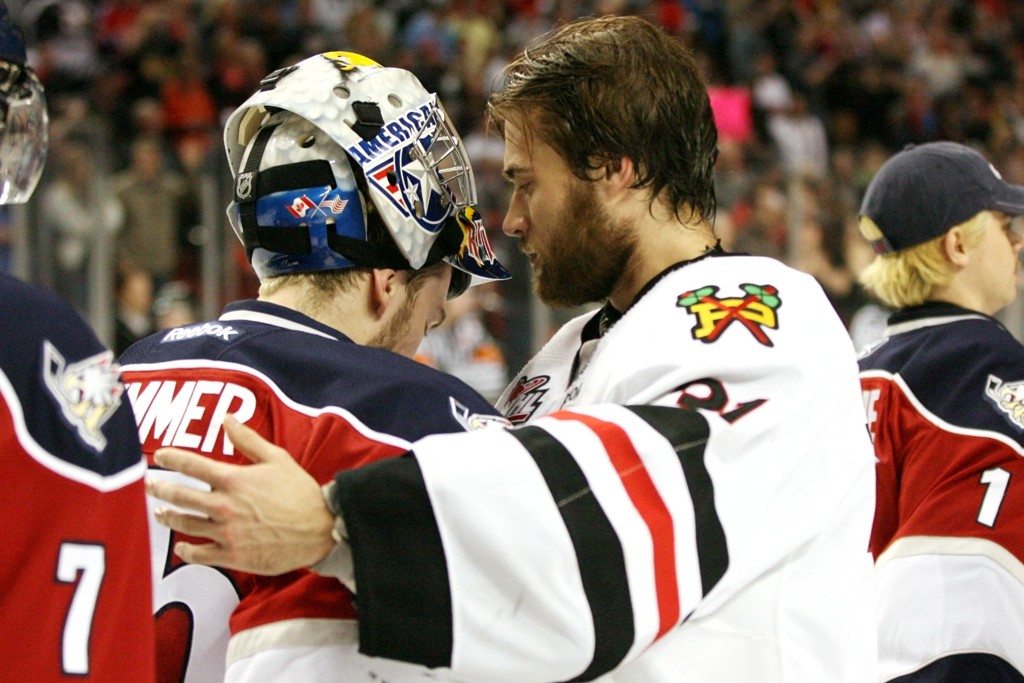 PORTLAND, OR – Much like a good book, the 2011-12 Americans season was full of unexpected plot twists and turns.  However, the biggest shocker of all may be how it all wrapped up.

Despite a valiant 57-save effort by Ty Rimmer, the Portland Winterhawks (12-3-0, 24 pts) again came from behind to beat the Tri-City Americans (8-2-5, 16 pts) 4-1 in Game 4 of the 2012 Western Conference Finals in front of 10,947 fans inside the Rose Garden.  With the win, the ‘Hawks swept the best-of-seven series 4 games to 0, claiming their second straight Western Conference crown and advance to play in the 2012 WHL Finals next week.

Meanwhile, the Americans came up short in their bid to return to the league finals for the first time since 2010.  Following a fourth division title in five seasons, the Americans swept past Everett in the opening round of the playoffs before dispatching of long-time rival Spokane in Game 7 of the conference semi-finals.  That set the stage for a marquee match-up with Portland but, after just four games, Tri-City is left to wonder what might have been.

Much like they did last night in Game 3, the Americans used their first power play opportunity to take a 1-0 lead in the contest.  With 2:20 left to play in the 1st period, and just 18 seconds remaining on the man-advantage, Brendan Shinnimin rifled a shot off the mask of Mac Carruth, who was unable to control the rebound.  There to take advantage was Adam Hughesman, who shelved a backhander for his team-leading 9th goal of the playoffs.

But, despite 40 launches on Carruth, it was the only one to evade Portland’s enigmatic netminder.

Meanwhile, the play of Rimmer was quickly becoming the talk of the town, as Rimmer kept Tri-City in the game.  By the end of the 2nd period, Rimmer had already kicked aside 40 shots, including 24 in the 1st period alone.  Despite the lofty shot total, though, the ‘Hawks still found themselves trailing after 40 minutes.

But, the tide quickly changed in the 3rd period, as Portland’s snow ball began to roll downhill.  First, 6:42 into the final period, Cam Reid carried the puck into the right circle before beating Rimmer inside the far post to tie the game at 1.  Then, less than a minute later, Marcel Noebels hit the ice on a line change and took Ty Rattie’s pass into the slot.  From there, Noebels shelved a backhand for his third goal of the series and a 2-1 Portland lead.

In the final minutes of regulation, the ‘Hawks tacked on two more, sealing Tri-City’s fate.  With 3:03 left in regulation, Sven Bartschi made a great play to swipe the puck away from Derek Ryckman.  After two quick moves, Bartschi tucked in his 7th playoff goal to make it 3-1.  Finally, 26 seconds later, Brad Ross capped the scoring after converting on Brendan Leipsic’s stretch pass.

Not that individual accolades mean much to him, but Rimmer certainly made his case to win the Del Wilson Trophy as WHL Goaltender of the Year, following his 57-save performance.  While the award is based on regular season performance, Rimmer’s playoff numbers are equally impressive.  In 15 games, Rimmer went 8-2-5 with a 2.46 goals against average and a 0.919 save percentage.  Currently, Rimmer ranks 2nd on Tri-City’s all-time playoff list for both goals against and save percentage.

Tri-City finished the night 1-for-4 on the power play and was a perfect 5-of-5 on the penalty kill.

The loss also wrapped up the WHL careers of three of the more dynamic players to ever don a Tri-City uniform.  Team captain Mason Wilgosh, a former list player who went on to play in a combined 331 WHL games with Tri-City, finishes his career with 132 points and a playoff-best 4 goals and 10 points in 15 games.

Shinnimin, another list player from Winnipeg, finished his overage season by becoming just the second Tri-City player to win a WHL Scoring Title and signed as a free agent with the Phoenix Coyotes.  Shinnimin, who finished on a 38-game point streak, combined for 401 points in 325 total games with Tri-City and leaves as the franchise’s all-time leading playoff scorer (64 pts).
And, Hughesman, who has played in a combined 410 games in an Americans jersey, departs with his name etched in the Tri-City record books.  In 338 regular season games (3rd all-time), Hughesman amassed 140 goals (3rd all-time), 210 assists (4th all-time) and 350 points (4th all-time).  Additionally, Hughesman appeared in more playoff games (72) than any other Tri-City player.

But, as quickly as the Americans will say so long to their fellow teammates, they will prepare to welcome a new era, as the club participates in the 2012 WHL Bantam Draft on Thursday, May 3rd. Fans can follow all of the Americans’ draft day highlights online at www.AmsHockey.com.

Notes:
Portland’s 61 shots on goal tonight was an impressive feat.  In Tri-City’s history, the most shots allowed in a playoff games was 70 back on March 26, 2005 in a 3-2 double overtime loss to Seattle.  That was in Game 1 of a first round series that the Thunderbirds eventually won 4 games to 1…Tri-City suffered their first playoff series sweep since 2000, when they lost to Spokane 4-0 in the opening round of the playoffs.  It’s also just the fourth time an Americans team has been swept in a playoff series.