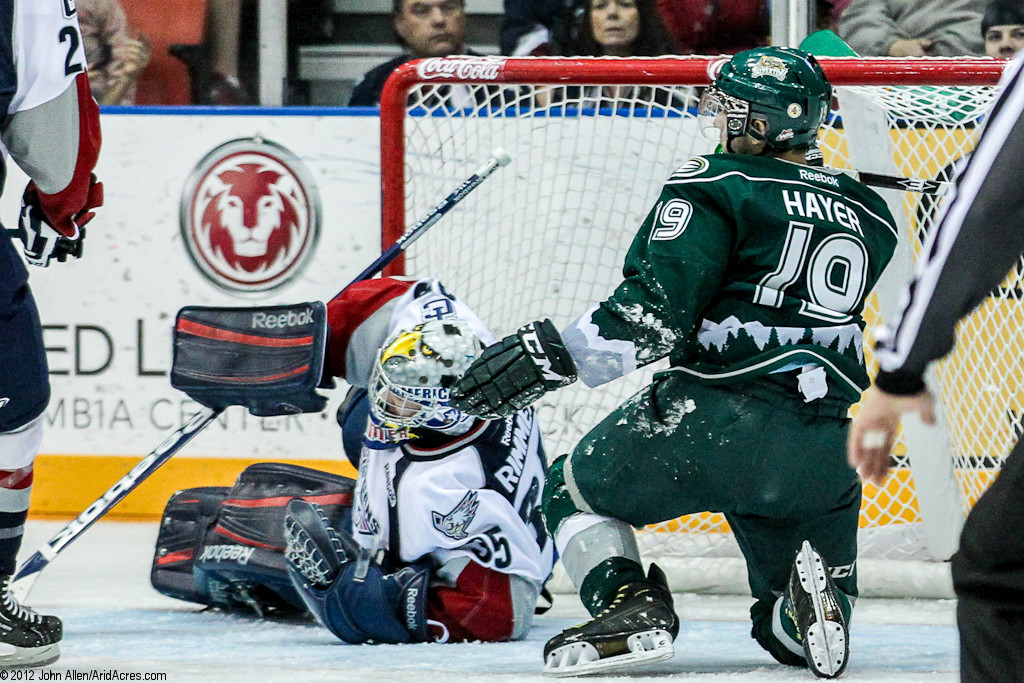 KENNEWICK, WA – After dropping Game 1 yesterday, the Silvertips came out aggressive and physical in Saturday’s contest.  By the end of the night, though, all it got them was a 2-0 series deficit.

Patrick Holland, Mason Wilgosh and Adam Hughesman each recorded power play goals, while Ty Rimmer kicked aside 17 shots, and the Tri-City Americans (2-0-0, 4 pts) skated away with a 3-1 win over the Everett Silvertips (0-2-0, 0 pts) in front of 3,915 fans at the Toyota Center.  With the win, the Americans take a 2 game lead in the best-of-seven opening round series, which shifts to Comcast Arena in Everett for Game 3 on Tuesday.

On Saturday, Everett’s physical play started from the drop of the puck, and it quickly put them at the mercy of the Americans’ power play.  By the midway point of the 1st period, Everett’s Manraj Hayer was assessed a double-minor for checking from behind and Ryan Harrison was tagged for a five-minute interference major and a game misconduct.  And, while Tri-City came up empty on the 4-minute power play, they made sure to make good twice on the score-at-will 5-minute man-advantage.

Only 37 seconds into Harrison’s penalty, Justin Feser found Holland at the mid-point, whose wrist shot eluded Kent Simpson and gave Tri-City the 1-0 lead.  Then, two and a half minutes later, Wilgosh knocked back a Malte Strömwall rebound, giving him two goals in the series, and the Americans a two-goal lead.  By the end of the 1st period, Tri-City had out-chanced Everett 18 to 5 while playing nearly 12 of the first 20 minutes on the man-advantage.

The 2nd period didn’t get much better for Everett, as just 4:20 into the period, Cody Fowlie was tossed from the game following his checking from behind major and game misconduct.  The penalty gave the Americans another score-at-will power play, which they used to extend their lead.  Two minutes in, and after a face-off win by Brendan Shinnimin in the Everett zone, the puck found Hughesman in the left circle.  From there, Hughesman snapped his 12th career post-season goal past Simpson, extending the Americans’ lead to 3.

With 63 seconds left in regulation, though, Rimmer lost his shutout bid following Ryan Murray’s wrist shot from the left point.  It was the only blemish on an otherwise solid night for Rimmer, who picked up his first 2 career playoff wins in back-to-back nights.  Meanwhile, Simpson turned aside 33 of the 36 shots he faced in the loss.  The Americans finished the game 3-for-8 on the power play and went a perfect 4-of-4 on the penalty kill.

After a two-game home sweep by Tri-City to start the series, the two division rivals will now switch venues for Games 3 and 4.  Game 3 will kick-off on Tuesday, March 27 at Comcast Arena.  Game time is 7:05 p.m.  This season, the Americans went 2-2 in Everett and hold a 3-2 all-time post-season record inside Comcast Arena.  The ‘Tips, meanwhile, will be looking to end their 8-game playoff losing skid and pull to within one of Tri-City in the best-of-seven series.  Fans can catch all the action live, via WHL Live, at Kimo’s, the Americans’ home away from home, starting at 7:00 p.m. The game will also be broadcast live on NewsTalk 870 AM, starting with the Sterling Savings Bank Warm-up Show at 6:45 p.m.