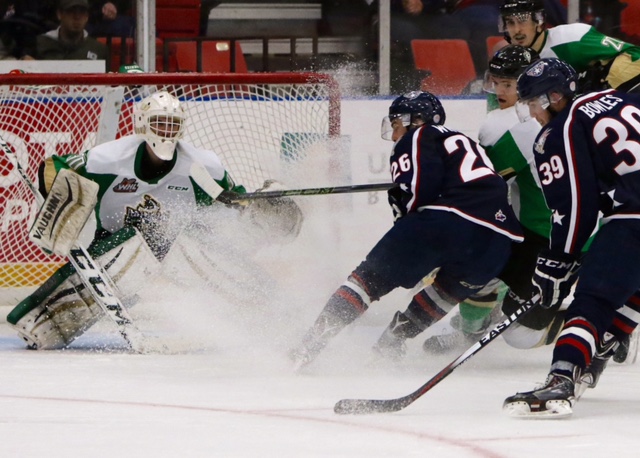 Kennewick, WA- The Tri-City Americans (3-3-1-0, 7 pts) took the lead early, but the Prince Albert Raiders (6-2-0-1, 13 pts) kept fighting, taking the lead in the second period and eventually defeating the Americans 5-3 in front of 2,700 at the Toyota Center on Wednesday Night.

Early in the first, Tri-City took the early lead as Parker AuCoin scored his first career WHL goal to put the Americans up 1-0. Prince Albert answered five minutes later, as Austin Glover tipped a shot from the point, deflecting into the goal to even the score at one. The Americans grabbed the lead again midway through the first, as a 5-on-3 power play and some nice passing allowed Brian Williams to fire a puck into a wide open net for a 2-1 advantage. Tri-City had a 13-4 shot advantage in the first period, as well as the lead going into the second.

Midway through the second, the Raiders tied the game, as Sean Montgomery fired a one-timer into the net. Two minutes after tying the game, Prince Albert took a 3-2 lead. After several chances with a loose puck in front of the net, the puck was finally slammed into the net by Reid Gardiner, giving the Raiders a one-goal lead after two periods.

Prince Albert extended the lead on a goal from Cal Babych. But the Americans would not go away, as Jordan Topping scored to cut the lead to 4-3. The Raiders would put the game away late, as Matteo Gennaro slapped a rebound into the net, sealing the victory for Prince Albert.

Evan Sarthou made 23 saves in the loss while Rylan Parenteau stopped 31 shots in the win.

Tri-City will hit the road for a game this Friday, Oct. 16, to take on the Vancouver Giants (3-3-1-1, 8 pts). Game time is at 7:30 p.m. at Pacific Coliseum. The Americans split the series last season, including a 1-1 record in Vancouver. Listen to the game on NewsTalk 870, or watch the game through WHL Live or at Kimo’s, your Americans home away from home.