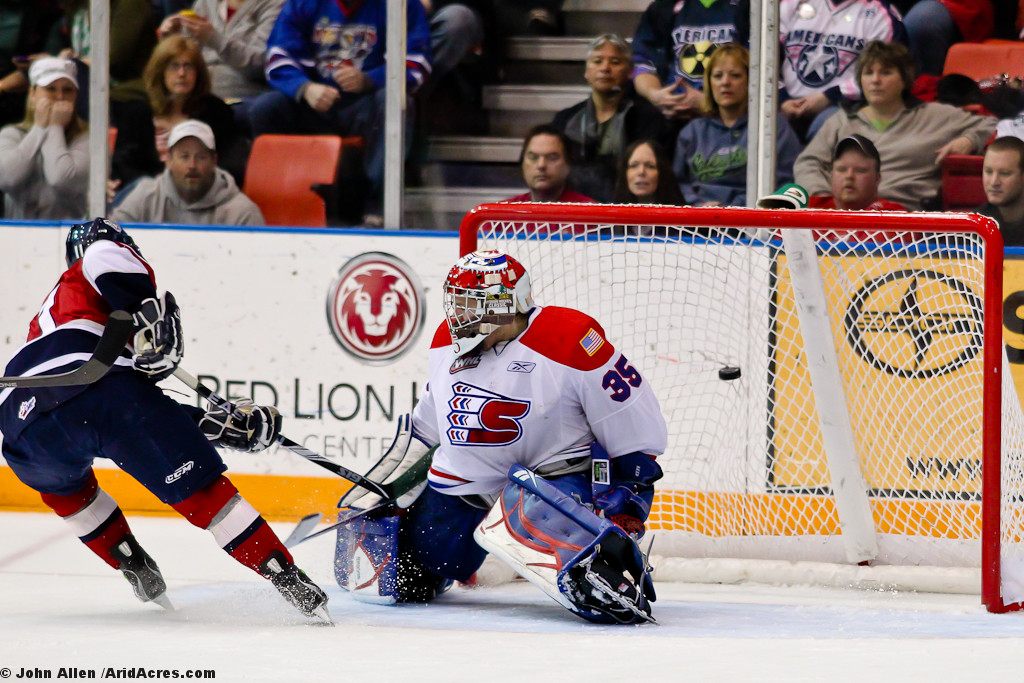 KENNEWICK, WA – In their final regular season home game, overages Kruise Reddick and Tyler Schmidt went out with a bang.

The duo, who have combined to play in over 630 games for Tri-City, scored three of the Americans’ six goals, leading the Tri-City Americans (43-24-2-2, 90 pts) to a 6-3 win over the rival Spokane Chiefs (47-18-4-2, 100 pts) in front of a standing-room only crowd of 5,945 at the Toyota Center.  With the win, the Americans not only snapped their five-game losing skid to their arch rivals, but they denied the Chiefs a chance at their first U.S. Division title in the franchise’s history.  It also marked the fifth straight season that Tri-City has finished with 27 or more home wins and 90+ points in a season.  Meanwhile, the loss ended Spokane’s nine game winning streak, with the Chiefs now locked into 2nd place in the division and 3rd in the conference.  The Chiefs, though, won the 12-game season series 7 games to 5.

Spokane struck first in this back-and-forth affair, as Dominik Uher connected on a 5-on-3 power play to put the Chiefs on top 1-0 early into the first period.  But, it proved to be the only lead Spokane would take, as they Americans rolled off the next three tallies.

While playing four-aside towards the midway point of the period, Schmidt notched his career-best 11th goal of the season, tying the game at 1.  Just 43 seconds later, Matt MacKenzie blocked a Spokane shot and was able to break out Reddick, who had slipped behind the Chiefs’ defense.  Reddick walked in all alone on Chiefs’ starter, James Reid, and connected on his first of two goals in the contest.  Then, five minutes later, and playing four-on-four once again, Reddick picked up career goal #90.

But, with less than a minute remaining, and on another power play, Blake Gal put back a Steve Kuhn rebound, pulling the Chiefs to within one at 3-2 headed into the first intermission.  For Gal, it was his 23rd goal of the season, nine of which have come against the Americans.

Then, deep into the second period, Spokane found the equalizer.  Back on the man-advantage, Anthony Bardaro beat Drew Owsley to knot the game at 3 with 5:23 left in the second.  But, in the final 1:22, Tri-City took advantage of back-to-back power play chances, giving them a 5-3 lead going into the second intermission.  First, with 56.6 seconds remaining in the period, Brendan Shinnimin redirected Reddick’s shot from the point, giving Tri-City the lead for good.  Then, just 28 seconds later, Carter Ashton found daylight behind back-up Mac Engel, collecting his 33rd goal of the season.

Down by two, the Chiefs turned up the heat on Owsley and the Americans, out chancing them 13 to 5 over the final 20 minutes.  But, it wasn’t until Chiefs’ coach Don Nachbaur pulled Engel for the extra attacker with less than three minutes to play, that Spokane finally capitalized.  At the 17:42 mark, Tyler Johnson swept a backhander past Owsley to make it a 5-4 game.

However, the Chiefs could not get lightning to strike twice, as they pulled Engel again, only to have Shinnimin block a shot by Jared Cowen, then carry the puck up ice uncontested before emphatically recording his second of the night and 34th of the season, capping the scoring in the contest.

Reid, who played the first 15:49, was pulled after allowing three goals on eight shots.  Meanwhile, Engel went on to play the rest of the way, stopping 14 of the 16 shots he faced while getting tagged with the loss.  Owsley came away with 30 saves to earn his career-best 36th win of the season.  Tri-City finished the night 2-for-8 on the power play, while Spokane converted on 3 of their 7 man-advantage chances.

The Americans will now wrap up their tripleheader weekend and 2010-11 regular season schedule tomorrow, Sunday, March 20, when they travel to the west side to face-off against the Seattle Thunderbirds (27-35-4-5).  Game time is 5:05 p.m. at ShoWare Center in Kent.  The Americans are 8-0 against Seattle this season and are looking for their first-ever season sweep of the rival T’birds.  Meanwhile, Seattle, who was eliminated from post-season contention last night following a tough 5-4 loss to Portland, will look to round out the season on a high note heading into the off-season.  Fans can catch all the action live, via WHL Live, at the Americans’ home away from home, Kimo’s Sports Café in Richland.  The game will also be broadcast live on NewsTalk 870 AM, starting with the Sterling Savings Bank Warm-up Show at 4:45 p.m.

If you would like to join Kruise’s MDA Challenge, contact the Americans office at 509.736.0606 and ask how you can contribute.