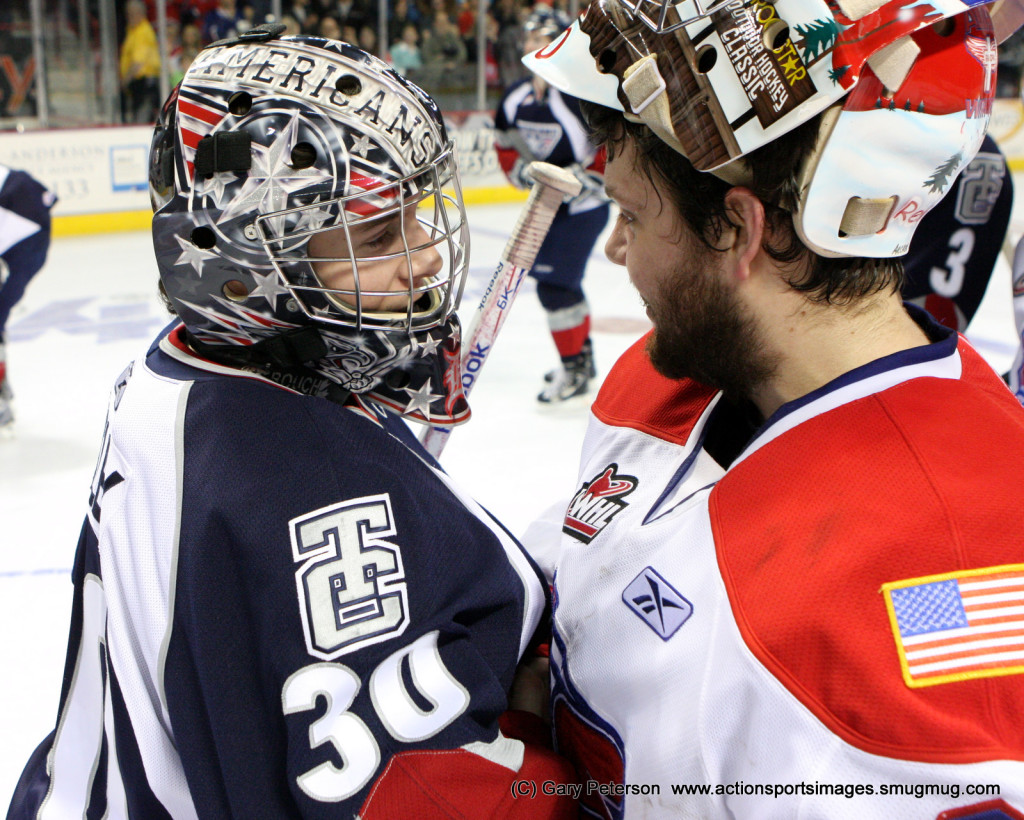 SPOKANE, WA – “It wasn’t supposed to end this way,” said a teary-eyed Kruise Reddick following arguably the most gut-wrenching loss of his long, illustrious WHL career…a career that also came to a close with the flick of Levko Koper’s wrist.

Storming back from a 3-0 deficit entering the third period, the #2 Spokane Chiefs (8-1-2, 16 pts) took a 4-3 lead midway through the period, only to watch the #3 Tri-City Americans (6-2-2, 12 pts) force a third consecutive overtime.  But, 6:39 into the extra session, Koper put back Collin Valcourt’s rebound in the slot, ending the defending Western Conference Champion’s season while advancing the Chiefs into the Conference Finals for the first time since 2008.

Faced with a do-or-die situation headed into Game 6, the Americans came out roaring on Tuesday.  Only 6:03 into the first period, Adam Hughesman gave Tri-City the 1-0 lead with a well-placed shot just inside the far post.  The bigger news coming out of the first period, though, was Tyler Johnson’s kneeing major penalty on Brendan Shinnimin.  Johnson was also assessed a game misconduct, ending his night, while Shinnimin never returned to the ice.

But, Tri-City kept pushing and, just 2:42 into the second period, and on the power play, took a two-goal lead.  Deep in the corner, Justin Feser dropped a pass back to the right circle for Patrick Holland.  From there, Holland ripped a shot over the shoulder of Reid for his second goal of the series.  Then, six minutes later, Holland fired a sharp-angle pass out of the corner on James Reid.  Parked in front of the Spokane netminder was Tyler Schmidt, who appeared to redirect the pass through Reid’s pads.  The goal was credited to Holland but, regardless, the Americans were enjoying a 3-0 lead headed into the second intermission.

But, throughout the series, both squads have had trouble holding onto leads and Tuesday’s game was no different.  Knowing what was at stake, and not wanting the series to go to a Game 7 on Wednesday, the Chiefs came out on fire to start the third period.

Just 1:16 into the period, Darren Kramer tipped Davis Vandane’s shot from the point past Drew Owsley, picking up his fifth goal of the playoffs.  Only 1:19 later, Dominik Uher made a great cross-ice pass to Tanner Mort in the right circle, who blasted a shot past Owsley for his first career post-season goal.

By the 3:13 mark of the third period, Tri-City’s lead had vanished.  In a heavily scrutinized play, Owsley kicked out Kenton Miller’s shot, where it appeared to ricochet off of Reddick’s skate and into the slot.  Blake Gal then crashed the net, poking the puck on goal before it was cleared by Tri-City.  Play continued for almost two minutes before a stoppage allowed the video goal judge and the on-ice officials to review the play.  After a lengthy discussion, video evidence showed Gal’s attempt crossed the goal line before being kicked out, overruling the original no-goal call on the ice and tying the game at 3.

Finally, with 11:03 left in regulation, the Chiefs took their first lead of the contest.  Behind Tri-City’s net, Kenton Miller battled Matt MacKenzie for the puck, eventually coming away with it and wrapping back around into the slot.  From there, Miller lifted a backhander on Owsley, who saw the puck glance off his glove and across the goal line.

But, Tri-City got a golden opportunity to tie the game late in the period.  After struggling on the power play most of the series, Schmidt found Hughesman camped backdoor on Reid, who proceeded to lift the puck over the diving goaltender, tying the game at 4 with his second goal of the contest.

And, for two clubs that had already played 12 overtime playoff games in their storied history, including two in this series, Game 6 would be decided 6:39 into another extra session.  After Valcourt’s shot hit him in the chest, Owsley had the puck work free and land in the slot.  From there, Koper, who had just hit the ice as part of a line change, flew in to net the game-winner.

Owsley finished the night with 33 saves while Reid collected 26 of the 30 shots he faced in the victory.  Tri-City wound up going 2-for-5 on the man-advantage and a perfect 1-of-1 on the penalty kill.