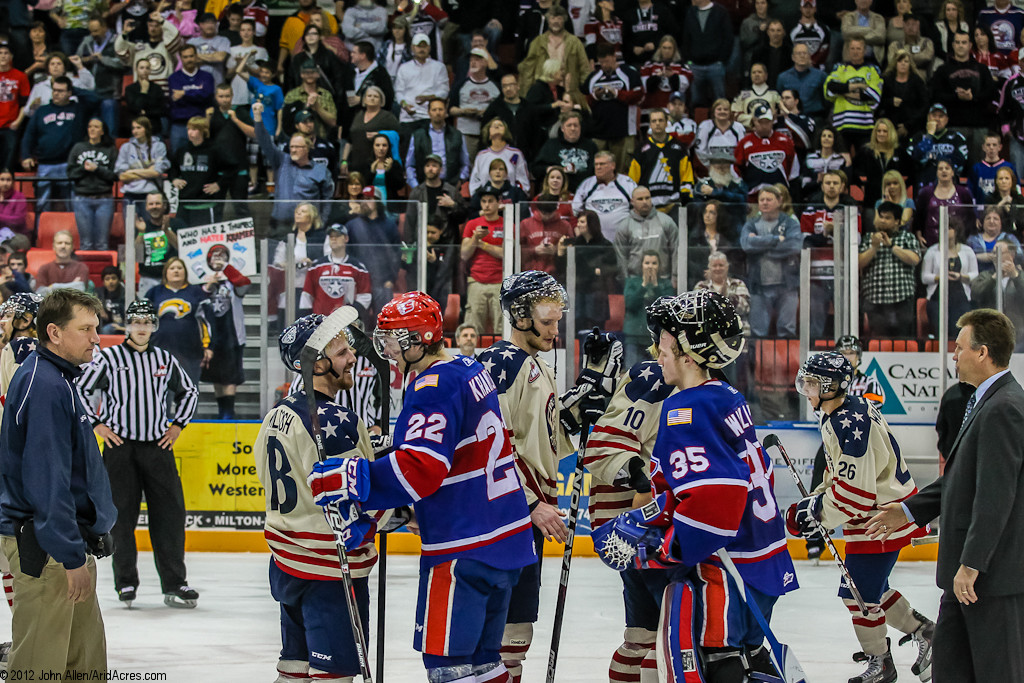 KENNEWICK, WA – He may have scored 58 this season, and 131 in his career but, for Brendan Shinnimin, it’s a safe bet he will remember his 18th playoff goal for a long, long time.

With 4:18 left in regulation, Shinnimin scored the would-be game-winner, rallying the Tri-City Americans (8-0-3, 16 pts) past the rival Spokane Chiefs (7-6-0, 14 pts) 3-2 in Game 7 of their conference semi-finals series in front of 4,679 fans inside the Toyota Center.  Tri-City, which trailed 2-1 with less than 6 minutes left in regulation, won the best-of-7 series 4 games to 3, advancing to the Western Conference Finals for the second time in 3 years and for the third time in the last 5 seasons.

After getting the first two shots of the game in the first couple minutes, Spokane spent much of the 1st period in their own zone, as Tri-City out chanced them 14 to 4.  But, despite just the 4 shots on goal, the Chiefs left the ice with a 1-0 lead after 20 minutes of play.  Nearly two minutes after Mike Aviani was denied by Ty Rimmer on a penalty shot, Dominik Uher connected on the power play, giving him 4 goals over his last 4 games.

Down by 1 entering the 2nd period, Tri-City continued to dictate the play, launching another 15 shots on goaltender Eric Williams.  Finally, 5:03 into the period, Brian Williams put back Shinnimin’s rebound, knotting the game at 1.  Still, despite a 29 to 9 shot advantage after two periods of play, the Americans found themselves tied with the Chiefs headed into the locker room.

Then, only 5:47 into the 3rd period, the Americans went back down by 1 following some great work by Aviani.  Despite twice having the puck knocked off his stick, Aviani took the puck into the corner, before feeding Mitch Holmberg in the slot, who just slipped it around Rimmer for a 2-1 Chiefs lead.

To make matters worse, with time continuing to tick off the score board, Williams came up with two big saves on both Shinnimin and Adam Hughesman, keeping Spokane’s lead intact.

But, with 5:22 left in the period, the work of Hughesman and Malte Strömwall tied the game.  During a prolonged shift, Hughesman attempted a tuck at the near post but had his rebound kicked out into the right circle.  There to pick it up was Strömwall, who then shelved a shot over Williams to pull Tri-City even.  Then, just 1:04 later, Williams and Shinnimin broke in on a 2-on-2.  After crossing paths entering the zone, Williams fed Shinnimin who, after dragging across the high slot, ripped a shot over Williams’ blocker to electrify the raucous home crowd.

From there on out, it was up to Rimmer and the Tri-City defense to hold down the fort for the final 4:18.  In favor of the extra attacker, Williams was pulled from the Spokane net with 1:38 left in regulation, but the Chiefs managed just one shot on goal as the Americans held on for the dramatic victory.

Rimmer earned his 8th win of the post-season behind a 17-save effort.  Meanwhile, Williams faced a playoff-high 48 shots, turning aside 45 of them in the tough-luck loss.  Tri-City finished the night 0-for-3 on the power play, while Spokane went 1-of-1 on the man-advantage.

Now, the Americans will face yet another U.S. Division rival in round 3, as they prepare to square off against the defending conference champion Portland Winterhawks (8-3-0) for the right to represent the Western Conference in the WHL Finals.  Portland, which eliminated the Kamloops Blazers with a 2-0 win in Game 7, will head to the Toyota Center for Games 1 and 2, starting on Friday, April 20.  Game time is 7:05 p.m.  Starting at 1:00 p.m. tomorrow, tickets will go on sale through all Ticketmaster outlets, including the Toyota Center box office, all Fred Meyer locations or online at ticketmaster.com.  For a full Western Conference Finals schedule, check out the Americans’ website at www.amshockey.com.

Notes:
With his game-winning goal tonight, Brendan Shinnimin tied Daymond Langkow (59) as the franchise’s all-time playoff scoring leader.  Shinnimin (41) already holds the franchise record for career playoff assists, passing Kruise Reddick (38)…With the win tonight, Head Coach Jim Hiller tied Don Nachbaur (27) for most playoff wins as a Tri-City coach.  Now in his 3rd season, Hiller has guided the Americans to 6 playoff series wins, the most of any Tri-City coach…With the win, Tri-City is now 2-1 all-time in decisive Game 7’s, all of which have come vs. Spokane inside the Toyota Center.  It also marks Tri-City’s first playoff series win over the rival Chiefs since 1995, when Tri-City won Game 7 5-4 in overtime.