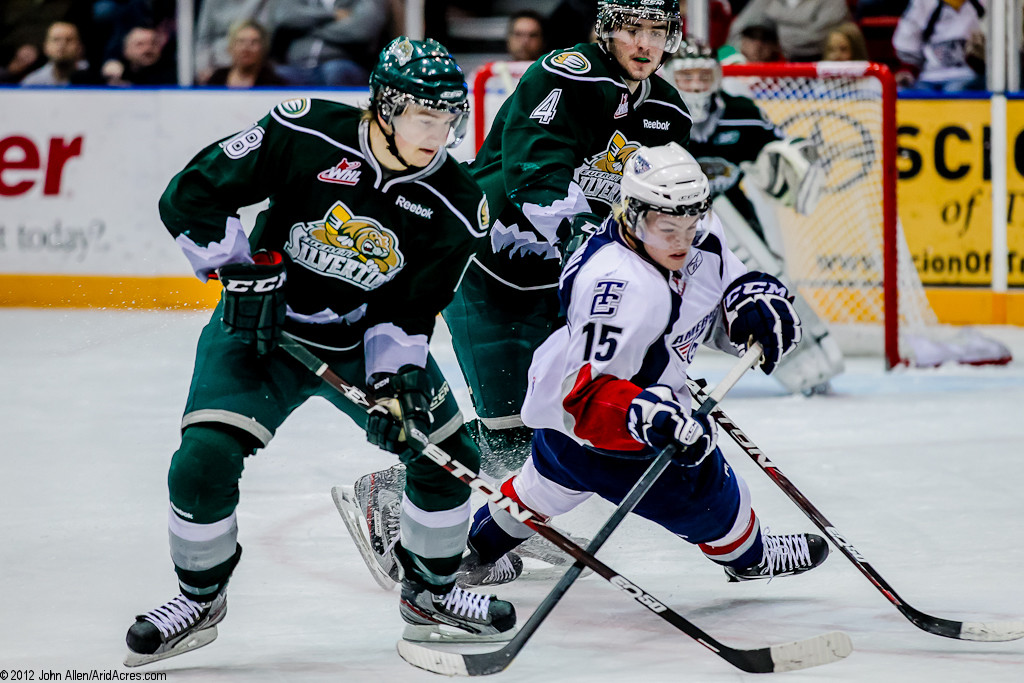 KENNEWICK, WA – Tri-City’s depth, in addition to their offense, was on full display on Friday night.

Malte Strömwall scored twice, while Connor Rankin and Jesse Mychan each chipped in a goal and an assist, helping guide the Tri-City Americans (1-0-0, 2 pts) past the visiting Everett Silvertips (0-1-0, 0 pts) 7-2 in the opening game of their Conference Quarter-Final match-up in front of 3,501 fans at the Toyota Center.  With the win, the Americans take a 1-0 lead in the best-of-seven series behind their highest scoring post-season game since dropping 8 on Chilliwack on March 20, 2010.  Meanwhile, Everett dropped their seventh consecutive playoff game.

Looking to set the tone early, the Americans roared out to a 4-1 lead, out-chancing the ‘Tips 17 to 6 through the first 20 minutes.  Tri-City scored 3 goals in the first nine minutes, starting with former-Tip Jesse Mychan’s power play marker only 3:11 into the contest.  Then, at the 8:50 mark, Strömwall scored his first of two on the night followed, 17 seconds later, by Mason Wilgosh’s 4th career post-season goal.

Everett would get on the board a minute and a half later, thought, as Ryan Murray’s blast pulled the ‘Tips to within 2, but it was as close as Everett could get.

Meanwhile, inside the final minute of the 1st, Rankin used a slick pass from Strömwall to bury his 2nd career playoff goal.  Then, 8:04 into the 2nd period, Adam Hughesman picked up his first goal of the post-season to make it a 5-1 Americans advantage.

Everett’s JT Barnett added a late marker in the 2nd, pulling the ‘Tips back to within three.  But, goals from Strömwall and Brian Williams inside the final seven minutes of regulation, ended any thoughts of a possible comeback.

Rimmer, behind 14 saves, notched his first career post-season victory.  Meanwhile, Kent Simpson started in goal for Everett, but allowed 5 goals in 28 minutes of work to get tagged with the loss.  Austin Lotz came on for the final 32 minutes, stopping 17 of the 19 shots he faced in relief.  The Americans finished the night 1-for-7 on the power play, but went a perfect 4-of-4 on the penalty kill.

The two division rivals will now rest up and do it all again tomorrow, Saturday, March 24 for Game 2 inside the Toyota Center.  Game time is 7:05 p.m.  Everett, which is now 0-5 at the Toyota Center this season, will be looking to knot the series at 1.  Meanwhile, the Americans will be aiming for a two-game home sweep before heading to Comcast Arena for Games 3 and 4 next week.  Tickets are available through all Ticketmaster outlets, including online at ticketmaster.com, the Toyota Center box office, or all Fred Meyer outlets. The game will also be broadcast live on NewsTalk 870 AM, starting with the Sterling Bank Warm-up Show at 6:45 p.m.