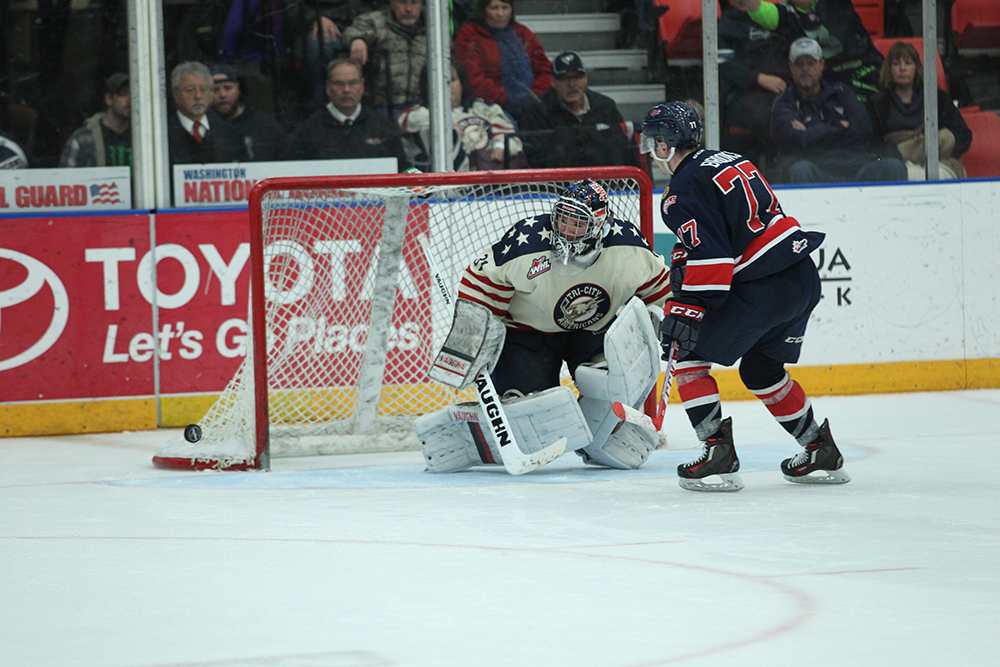 The Americans got on the board midway through the first period, as Dylan Coghlan joined the rush and fired a shot into an open net for a 1-0 lead. Late in the period, Parker Wotherspoon fired a shot from the right point, and was deflected between the goalie’s legs by Morgan Geekie for a 2-0 lead after the first period.

Regina fought back in the second period, as Adam Brooks scored to cut the lead to 2-1. A minute later, the game was tied as Jared Freadrich lit the red lamp. But the Americans would respond, as Jordan Topping put the Americans back in front 3-2. Late in the third, Kyle Olson found the back of the net on the power play for a 4-2 lead after two periods.

Midway through the third, Cole Sanford made it a one-goal game. Two minutes later, the game was tied on a goal from Rykr Cole. Neither team could find a winner in regulation, sending the game to overtime. Tri-City outshot Regina 3-2 in overtime and each team had scoring chances, but no goals were scored, sending the game to a shootout.

In the 10th round of the shootout, Brandon Carlo fired a shot high glove side that put the Americans in front. Evan Sarthou shut down Chase Harrison’s attempt to tie, giving the Americans a 5-4 win.

The 10 rounds is the longest shootout in Americans’ history, with the previous record being a seven-round shootout.

Tri-City recorded six penalty minutes and was 1-of-2 on the power play, while Regina was unsuccessful with three power play opportunities and spent four minutes in the penalty box.

The Americans have two days off before they are back in action against the Vancouver Giants (17-23-3-2, 39 pts). Game time is at 7:05 p.m. at the Toyota Center. The Americans won the last meeting between the two teams, 4-1, in Vancouver, although the Giants won the first two meetings of the season. Tickets are available at all Ticketmaster locations, including the Toyota Center Box Office, at any Fred Meyer location or online at Ticketmaster.com.