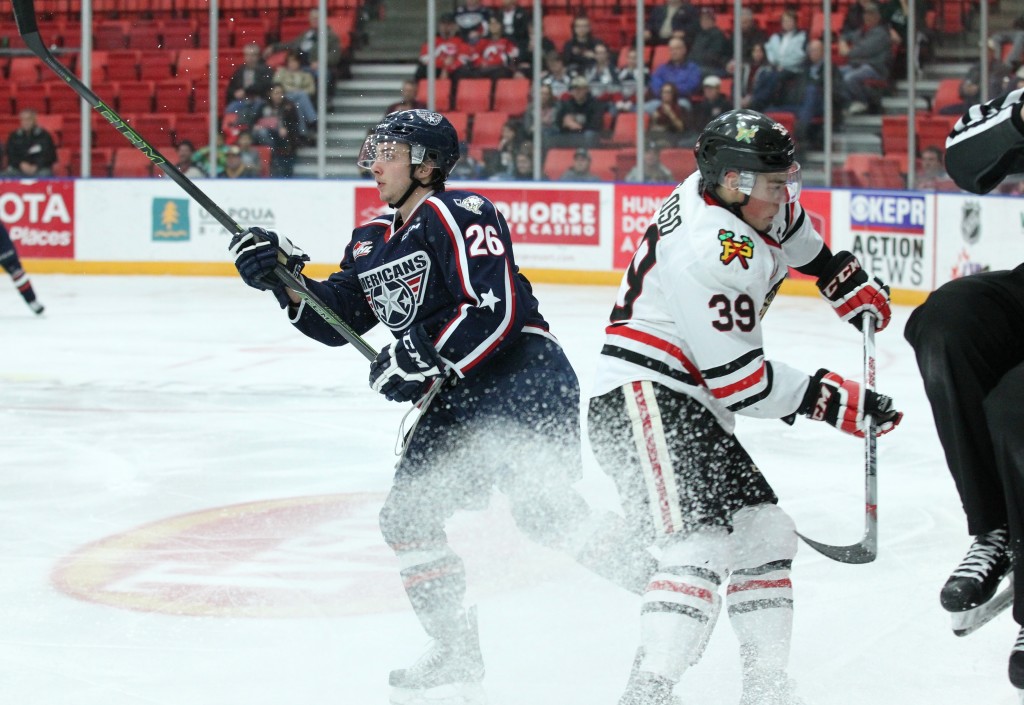 Tri-City jumped on the board 2:21 into the first. Brian Williams received the puck at the right faceoff circle, skated to the net and fired the puck between the pads of Michael Bullion for a 1-0 lead. The Americans made it 2-0 as Tyler Sandhu cleaned up a rebound in front of the net midway through the period. Jordan Topping put the Americans up 3-0 after a breakaway goal, followed by his second of the game after redirecting a shot from the point with less than a minute remaining to make it 4-0 after 20 minutes.

Portland gained some momentum early in the second period, as Cody Glass scored 1:29 into the second to get the Winterhawks on the board. Three minutes later, the Tri-City lead dwindled to 4-2 after a goal from Blake Heinrich. The Winterhawks sliced the lead to 4-3 midway through the period as Alex Schoenborn scored a shorthanded goal. And the game was tied late in the second, as Dominic Turgeon fired a wrist shot top shelf to even the score at four going into the third period.

There was tension in the rink as the third period began with both teams looking to take the lead. Tri-City took the lead 6:29 into the period, as Parker Wotherspoon’s shot from the point found its way through traffic and into twine for a 5-4 lead. The lead increased to 6-4 just 21 seconds later, as Austyn Playfair recorded his first point of the season, feeding Jordan Roy in the slot, as he fired the puck home for his first career WHL goal. Portland fought to get back into the game, but couldn’t get anything going as the Americans earned the win.

The Americans spent 20 minutes in the penalty box and were unsuccessful with four power play chances. The Winterhawks recorded 16 penalty minutes and didn’t score with its lone power play opportunity.

Evan Sarthou made 20 saves in the win while Michael Bullion stopped 23 shots in the loss.

Tri-City has a home and home to finish the first half of the season, beginning this Friday, Dec. 18, against the Seattle Thunderbirds (18-11-2-0, 38 pts). Game time is at 7:35 p.m. at the ShoWare Center. The Americans lost the last meeting against the Thunderbirds, 3-2, in Kent. Listen to the game on NewsTalk 870, or watch the game through WHL Live or at Kimo’s, your Americans home away from home.