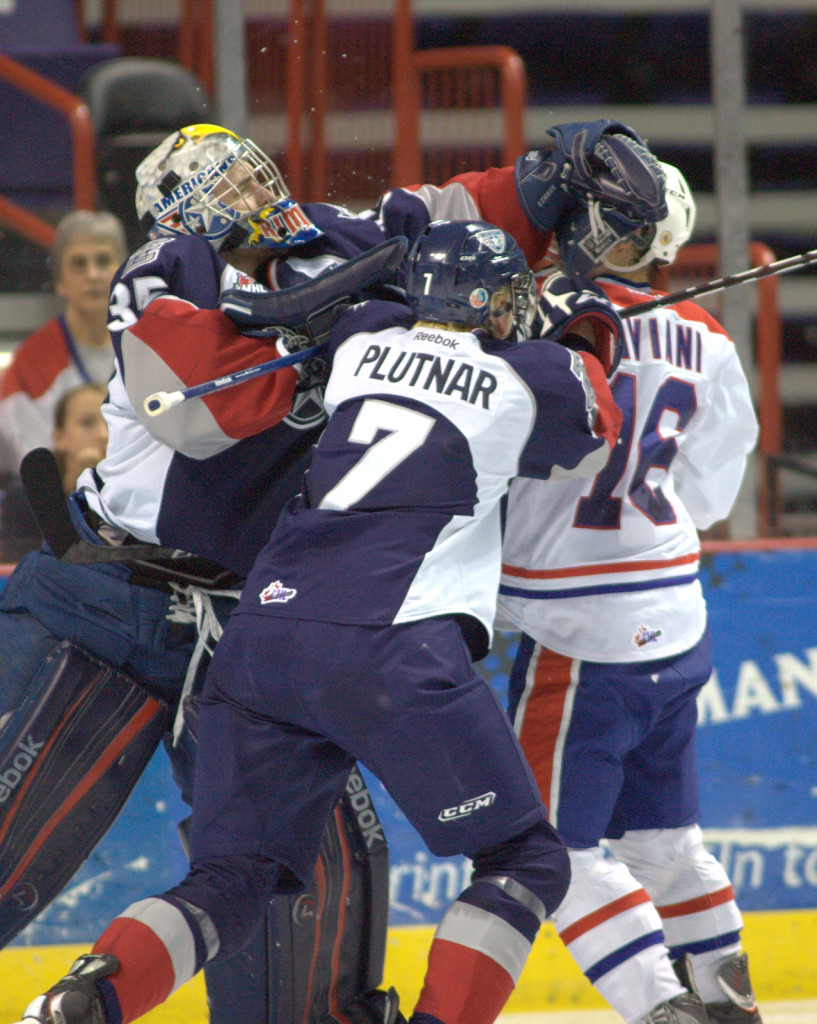 SPOKANE, WA – Another game, another thriller in the Chiefs and Americans playoff series.

Brendan Shinnimin scored the game-winning goal and Ty Rimmer stopped 24 shots to backstop the visiting Tri-City Americans (6-0-1, 12 pts) to a 2-1 win over the Spokane Chiefs (5-4-0, 10 pts) in front of 4,742 fans inside Veterans Memorial Arena.  Behind their third straight road win of the post-season, the Americans now hold a 2-1 edge in the best-of-seven series.  Meanwhile, Spokane suffered their first home ice loss in these playoffs.

In a tight-checking 1st period, it was the Americans who, for a third consecutive game, scored the first goal of the contest.  Just before the midway point of the period, Spokane’s Davis Vandane tried to rim the puck around the boards and out of the Chiefs’ zone.  However, Justin Feser picked off the attempt and quickly got a shot away on netminder Eric Williams.  Williams made the save, but couldn’t control the rebound, and Nathan MacMaster was there to take advantage.  Sliding the puck under the left pad of Williams, MacMaster registered his first goal of the playoffs.

Then, with 5:04 left to play in the first, sustained pressure in the Chiefs’ zone eventually led to a 2-0 Tri-City lead.  During a flurry in front of Williams, Adam Hughesman eventually corralled the loose puck and passed it out to Mitch Topping at the point.  Following up on Topping’s rebound, Shinnimin lifted a backhand over Williams, netting his second goal of the series and 5th of the post-season.

Still 2-0 in the 2nd period, tensions started to boil over, as the clubs combined for 6 of the game’s 9 total infractions in the middle frame.  Despite the extra ice in the period, neither side could make any headway on the scoreboard.

Then, snake bit by video replay in Game 2, the ‘eye in the sky’ went against Spokane again in the 3rd period.  Following the review, a deceptive goal was overturned after it was found that the puck sat directly on top of the goal line, but never crossed, keeping the Chiefs off the scoreboard.

Spokane, though, with 7:44 left in regulation, finally was able to solve Rimmer.  After knocking down a Brian Williams clearing pass, Steven Kuhn then crashed the net.  Once there, he was able to pick up a Reid Gow rebound and lift it over a fallen Rimmer, pulling the Chiefs to within 1.

But, it was as close as the Chiefs would get on Wednesday, despite some close calls down the stretch.  Rimmer finished the game by turning aside 24 of the 25 shots he faced, notching his sixth win of the playoffs.  Meanwhile, Williams finished with 27 saves in the tough-luck loss.  Tri-City went 0-for-1 on the power play, but was a perfect 3-of-3 on the penalty kill.

Both teams will enjoy a day off tomorrow, before the series resumes on Friday, April 13 for Game 4 inside Veterans Memorial Arena.  Game time is 7:05 p.m.  Since the start of January, the visiting team has won 7 of the last 9 meetings between the two clubs, which includes wins in each of Tri-City’s last four visits to Spokane.  The game will be aired locally in the Tri-Cities on KVEW-TV’s My Network 280, starting at 7:00 p.m.  The game will also be broadcast live on NewsTalk 870 AM, starting with the Sterling Bank Warm-up Show at 6:45 p.m.

Notes:
With a goal tonight and, when combined with the regular season, Brendan Shinnimin now has recorded a point in 30 straight games.