KENNEWICK, WA – The Americans have drafted 11 players in this year’s draft featuring 2002 birth year players. Those 11 include six forwards, four defensemen, and one goaltender.

With their first pick, 12th overall, the Ams selected 15-year-old Kaden Kohle, a power forward from the Humboldt Broncos. Kaden, listed at 6’2 and 186 pounds, is the 5th straight forward taken by the Americans in the first round of the Bantam Draft. The Humboldt, SK native has stayed at home playing with the Humboldt Broncos for the past two seasons, racking up an impressive 38 goals and 28 assists in just 29 games this season.

Assistant General Manager and Head Scout, Barclay Parneta said, “Kaden is a power forward that competes hard for time and space, scores big goals in big games, has great puck vision, and is a creative player. He gets to dirty zones and comes out with pucks. His play style fits well to what we are building in Tri-Cities. He wore the C (captaincy) on his team and has on and off ice leadership qualities. We are very excited to watch and help him develop.”

In the second round, the Americans selected Thomas Cadieux (34th overall), a defenseman from the Notre Dame Hounds. The 5’11, 155 pounder put up eight goals and 13 assists this past season in 29 games.

“Thomas is a defenseman that plays a heads up, 200-foot game,” said Parneta. “He adds to a rush, has a terrific shot from the point that lends well to the power play, and has a poise to his game that is well beyond his years. This guy is a responsible and mature on-ice player that does not panic. He plays a new-era type of game.”

The third round of the draft featured the Ams only netminder pickup in Talyn Boyko (53rd overall). Talyn is a 6’4, 149 pound tender from the Pursuit of Excellence Hockey Association. In his 18 appearances this past season, he had a 2.9 Goals Against Average, a 0.886 Save Percentage, and a 13-2 record including two shutouts.

Parneta was really impressed with Boyko; “Talyn has a tremendous net presence with his 6’5 frame. It’s hard to find spots to shoot on this kid. He really grew into his body by the end of the year. He finished very strong, backstopping his team to a championship finish in the bantam prep CSSHL, stopping 30 of 31 shots against a very potent Delta Hockey Academy in a 7-1 victory. Combine all that with a stellar performance in the Alberta cup and he really showed us that he is a goalie with a bright future.”

The Americans went on to pick eight more players in this order:

Barclay Parneta had this to say about the overall draft; “We really think that we have helped shape the future with a combination of skill, speed, compete, and grit from this group. We are going to be a hard team to play against with an offensive punch. Going into this draft, Bob Tory (General Manager) had shaped a vision and criteria of what he wanted to build with. I think as a whole, the scouting staff has done a great job at recognizing those goals and sticking to them.

Stats on each player: 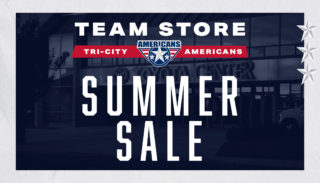