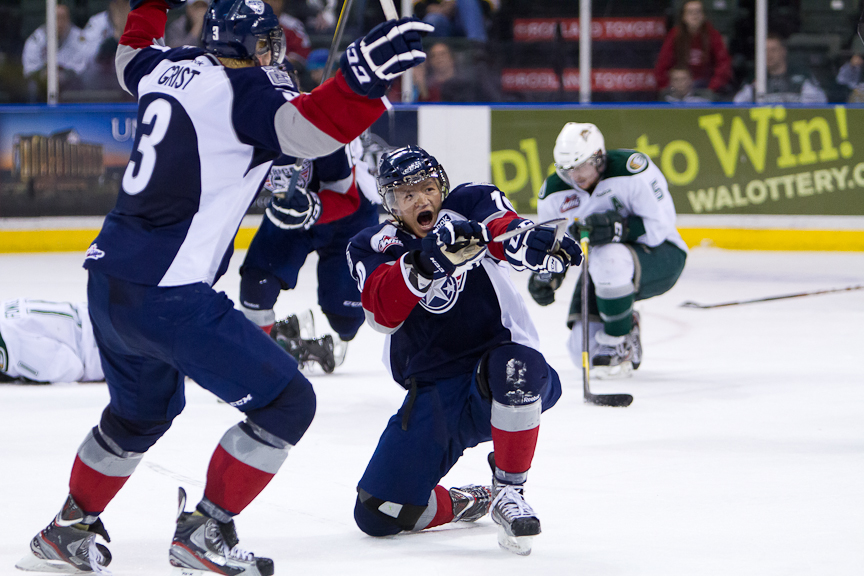 EVERETT, WA – A tense, wild opening round series came to a dramatic conclusion on Wednesday night.

The Everett Silvertips (0-4-0, 0 pts) rallied from a 3-0 deficit to force overtime, only to then be stunned when Zachary Yuen ended their season with 67 seconds left in overtime, lifting the Tri-City Americans (4-0-0, 8 pts) to a dramatic 4-3 win in Game 4 of their Western Conference Quarter-Finals series in front of 2,385 fans at Comcast Arena.  With the win, the Americans sweep the best-of-seven first round series, advancing to the Western Conference Semi-Finals for a fifth straight year.  Meanwhile, the ‘Tips, behind a ninth straight playoff loss, make an opening round exit for the fifth consecutive season.

Wednesday’s game certainly did not appear to be headed for its dramatic conclusion, as Tri-City skated out to a 3-0 lead after two periods of play.

Six minutes into the 1st period, Brendan Shinnimin put the Americans up 1-0 after he slipped around Josh Caron and beat Kent Simpson over his blocker.

Then, just 31 seconds into the 2nd period, and on the power play, Mason Wilgosh spun around in the high slot before firing a shot inside the near post to make it a 2-0 lead.  Finally, at the midway point of the 2nd period, defenseman Mitch Topping let a blast go from the mid-point that found its way through traffic and past Simpson.

But, chaos ruled over the final 20 minutes, setting the stage for the climactic finish.

Over five and a half minutes into the 3rd period, Shinnimin was tagged with a roughing penalty, giving the ‘Tips their third power play of the contest.  Thirty four seconds into the man-advantage, and during a scramble in front of Ty Rimmer, Ryan Harrison knocked back a Ryan Murray rebound to get Everett on the board.

Two minutes later, Harrison, who missed yesterday’s game while serving a 1-game suspension for an interference major in Game 2, was tossed again following a charging major and game misconduct.  The penalty gave the Americans a score-at-will, 5-minute power play and a chance to bury the ‘Tips.  However, the winds of change started to blow in less than a minute into the Americans power play.  Once he got past the point man, Murray broke free, then finished by lifting a short-handed backhander past Rimmer.  Now down by just one, the ‘Tips stemmed the tide for the remainder of Tri-City’s power play, giving new life to the hometown faithful.

With 2:14 left to play, Tri-City’s Sam Grist was sent to the box after being called for tripping.  After staying in net for the first half of the power play, Simpson was finally called to the bench in favor of the extra attacker.  The gamble paid off, as with under a minute left in regulation, Caron found daylight at the near side, knotting the game at 3 and sending the contest to overtime.

Neither team held back in the extra session, combining for 27 shots on goal.  However, Tri-City seemed to regain control of the play in the second half of the overtime.  And, with 1:07 remaining, Yuen grabbed a loose puck at the top of the left circle then, from one knee, got a shot off that sailed over Simpson’s glove to end the game.

Rimmer finished the night with 42 saves on 45 shots, improving to 4-0 in the playoffs.  Meanwhile, Simpson’s night ended with 35 saves in the loss.  Tri-City went 1-for-5 on the power play, while Everett finished 2-of-4 on the man-advantage.

The Americans, who acquired plenty of bumps and bruises in the series, will now get a chance to rest and practice before their conference semi-final series kicks off next weekend.  Tri-City finished as the #1 seed in the Western Conference, meaning they will play the lowest remaining seed once the First Round concludes.  Assuming a Portland win tomorrow in Kelowna, Tri-City will face the winner of the Vancouver/Spokane series, which currently sits knotted at 2.  Stay tuned to the Americans’ website for updated playoff information as it becomes available.